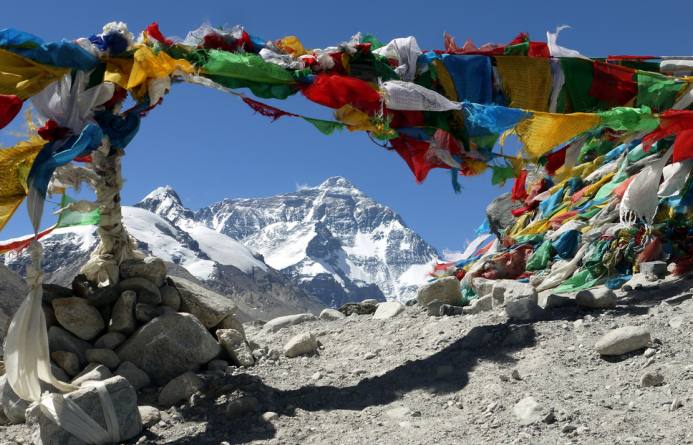 Everest, the best known mountain in the world, is of course the world's highest peak. Everest is famous for expeditions and trekking. Everest is in the eastern part of Nepal, the Solukhumbu District, and should be visited by every traveller who loves adventure in this spectacular area. The Sagarmatha National Park, established in 1976 with an area of 1148 square kilometers protects Everest. The park is largely composed of the rocky terrain and gorges of the high Himalayas. Altitudes range from 2845 meters above sea level (9,330ft) to the top of the world Mt. Everest at 8848 meters (29,028ft). The Everest region is incredibly beautiful and you can explore panoramic views of the highest mountains and peaks such like Everest (8848m.), Shishapangma (8035m.), Cho Oyu (8201m.), Lhotse (8516m.), Amadablam (6812m.), Nuptse (7855m.), Island (6189m.), Mera (6476m.), Gosainthan (8013m.), Makalu (8463m.) and many other peaks as well. Besides the high Himalayas you can also explore the ancient monasteries, temples, and local villages with their culture, traditions, and religions. Various ethnic groups such as Sherpa, Rai, Magar, and Tamang live in the Everest Region. Each group has its own lifestyles, culturally and geographically. The Sherpa community lives in the higher part of the Everest Region and others are in the lower part. People from the Everest Region are involved in tourism of course and also traditionally in agriculture. The Buddhist and Hindu peoples are almost equally represented as religions in the Everest Region.

In the Everest Region, travelers can take various alternative trekking routes to explore the high Himalayas and its natural beauties. Alpine Excursion Treks & Expedition Pvt. Ltd. will manage the various trekking trails as per the travelers time, interest, physical condition. Basically Teahouse trekking can be done throughout the area in the Everest Region but if someone is interested in making a camping trek that can also be arranged. The hospitality especially from the Sherpa community is wonderful. Meeting your requirements and interests Alpine Excursion Treks & Expedition Pvt. Ltd. and its expert crew will suggest the best treks. Everest Basecamp Trekking, Dudhkunda Pikey Trekking, Gokyo- Chola Pass Trekking, Everest 3 Passes Trekking, Renjola La pass via Phaplu Trekking, etc. are the major trekking routes in Everest Region. If these routes do not meet your requirements we can customize to meet your interest and requirements. We will always be ready to advise and manage your trek.