The Himalayan republic has become the latest among a few nations to ease entry protocols by removing all pre-arrival testing requirements. 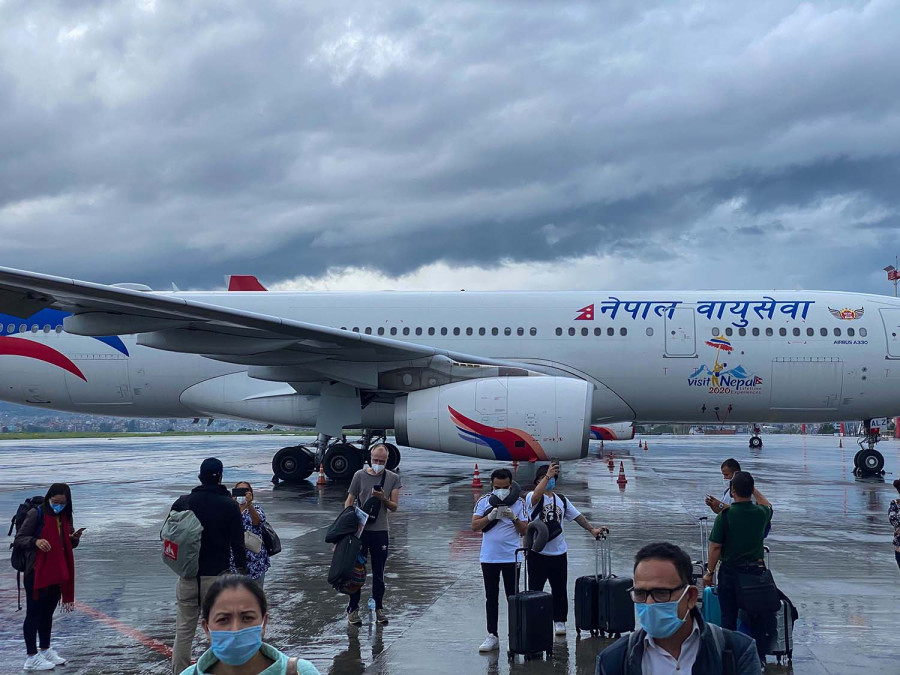 But incoming visitors still have to fill out a travellers form issued by the Covid-19 Crisis Management Coordination Centre (CCMCC) at the point of entry. Shutterstock

Nepal on Thursday threw the door wide open to tourists, removing all pre-arrival testing requirements for fully vaxxed travellers in a bid to recharge its moribund tourism industry. All foreign visitors have to do is flash their vaccine cards, officials said.

The Himalayan republic has become the latest among a few nations to ease entry protocols, according to government officials.

Last week, all Covid-19 controls in Kathmandu Valley were lifted following a sharp drop in the case load.

“Fully vaccinated international travellers can enter the country by just showing that they have been vaccinated,” said Narayan Prasad Bhattarai, director general of the Department of Immigration.

Travellers who have not been vaccinated or have received only one jab need to produce a negative RT-PCR test not older than 72 hours.

Thursday’s travel protocol supersedes all previous rules, including the quarantine requirement, he said.

But incoming visitors still have to fill out a travellers form issued by the Covid-19 Crisis Management Coordination Centre (CCMCC) at the point of entry.

“The need to fill out the form will stay because the coronavirus outbreak in many countries is not yet over, and we have to do contact tracing,” said Sunita Nepal, spokesperson for the CCMCC which recommended to the government to lift the PCR test requirement to ease travel.

The forms have attracted complaints as being long and complex. “We have simplified the form,” said Nepal.

Countries across the world have been easing entry rules for foreign arrivals as coronavirus infections fall.

Travellers leaving Nepal are advised to check with their airline as it is responsible for informing them about the health protocol and paperwork requirement in the destination countries, according to Bhattarai.

Nepal on Thursday reported 112 new coronavirus cases in the last 24 hours, down from more than 12,300 daily cases on January 20, according to the Health Ministry. Health officials say that the vaccination progress has also been good so far.

“As more than 62 percent of the total population have been fully vaccinated and over 74 percent have taken the first dose, it was time to review the PCR requirement for travellers,” Dr Janak Koirala, an infectious disease expert, told the Post.

“Now it is not necessary to get a PCR test report if a person is fully vaccinated. Most people who come to Nepal have taken their booster shots too.”

The tourism industry has long been lobbying the government to dump the PCR test requirement for being a hassle.

He said that Nepal’s mountaineering season, the high end tourism segment, had started, and Thursday's announcement would be a big relief for the tourism industry that had never seen such a disaster before.

According to Sherpa, demand for mountaineering, particularly for Everest, has not been so good this year, considering current booking trends.

“It may be because of the Russia-Ukraine war. Besides, inflation has jumped so high that people across countries have cut their travel budgets,” said Sherpa. “So far we have received 50 bookings for Everest, which is good but not as good as last year.”

Last spring, a record 408 climbers received Everest permits despite the scare of the Covid-19 pandemic which was then at its peak.

While the Omicron variant did little damage to the country, the Delta variant had dealt a severe blow to Nepal’s tourism last year.

Nepal’s tourism industry sank to its lowest in four and a half decades and revenues hit rock bottom, making a big dent in the country’s economy.

According to the World Travel and Tourism Council’s 2021 annual research report, the contribution of Nepal’s travel and tourism sector to the total GDP plunged by a steep 46.6 percent in 2020 due to Covid-19 related restrictions.

The total contribution of travel and tourism to employment also dropped by 19.9 percent. This translates into 207,000 job losses in 2020. In pre-pandemic 2019, Nepal’s tourism had generated 1.04 million jobs. Domestic tourist spending too dropped sharply by 37.6 percent to Rs80.3 billion in 2020, down from Rs128.6 billion a year earlier.

In 2020, Nepal had just launched an ambitious Visit Nepal Year campaign with much fanfare, aiming to attract at least 2 million tourists, only to have to abandon the programme after the incipient pandemic exploded into worldwide proportions.

Nepal ordered a second lockdown on April 29 as a public health measure to prevent the spread of Covid-19. The stay-home order was lifted after four months on September 1.

According to the Nepal Tourism Board, the number of foreign visitors entering the country last year totalled 150,962, a long way from the 1.19 million arrivals in pre-Covid 2019.

The 150,962 arrivals in 2021 represent the lowest figure since 1977 when the country hosted 129,329 tourists, a year after tourist numbers in Nepal reached six digits for the first time.

The country's economy is suffering due to low output after tourism collapsed. Its foreign exchange reserves too are depleting at a fast pace.