Posted by: Road to Everest: Tourists can breakfast in Kathmandu and drive to Khumbu for dinner With a new bridge, Khumbu region has become accessible by land, an alternative to flying to the precarious Lukla airport. The newly constructed bridge over Dudh Koshi rive   Posted Date: December 08, 2020 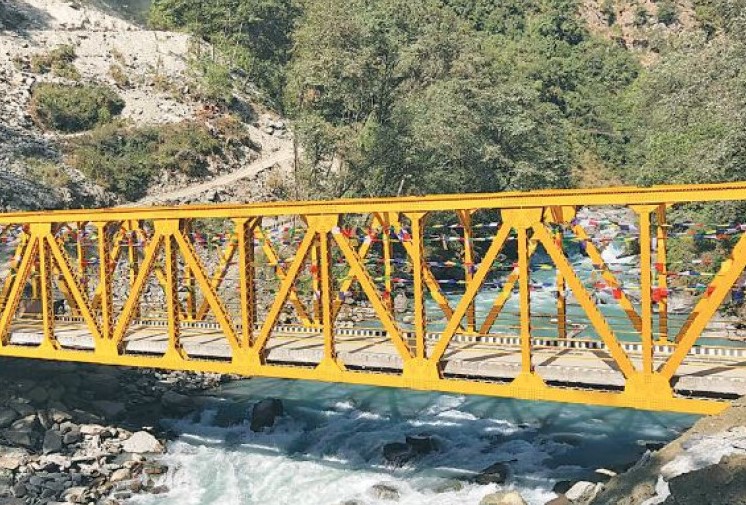 “Friends, if you are buying cars, please consider buying one that can roll on the roads of Solukhumbu. The time when we will be able to have breakfast in Kathmandu and dine in the Everest region is not far,” Sherpa posted on his.

Khumbu, also known as Everest region, the dream destination for many over the world, will soon become more accessible. As of now, the popular way to get to the top of the world is to take a 25-minute flight to Lukla’s Tenzing-Hillary airport and then trek towards Everest.

But the construction of the bridge over the Dudh Koshi river at Orlang Ghat of Solukhumbu is a landmark for connectivity.

With access only by air, the Everest region is perhaps one of the most expensive places in the world to visit because all supplies have to be flown in or carried on people’s backs, deterring potential tourists, especially domestic ones.

A single cooking gas cylinder costs around Rs15,000, as it is ferried by porters and mules. A trekker has to shell out around Rs300 for a cup of tea. Air freight charges from Kathmandu to Lukla stand at around $1.50 or about Rs180 per kg.

Locals from the region had long been calling on the government to construct the road, citing high costs of commodities, flight service unpredictability and dangerous flights to Lukla Airport, which is considered one of the most dangerous airports in the world.

Although Lukla, 2,860 metres, lies at ward 2, motorcars will not go directly up to the airport.

“We have planned to extend the road up to ward number 2 by the end of this fiscal year, and up to Chaurikharka in the next fiscal year,” said Bhattarai.

Chaurikharka is about a day’s walk from Lukla and a day away from Chaurikharka lies Namche Bazaar, the largest town in the Khumbu region. From Namche it’s five days’ walk to Everest Base Camp.

The government had first decided to open a track to the Everest region after more than 3,000 tourists were stranded in Lukla in November 2011 after adverse weather conditions halted flights from Kathmandu for six consecutive days.

Flight cancellation due to adverse weather is a recurring problem and in the monsoon season, there are no flights to Lukla.

During the tourist season in spring and autumn, hundreds of tourists are often stranded at Lukla airport as no flights can land due to bad weather and high winds. Tourists are forced to return to Kathmandu by helicopter paying up to $500 per person, again weather permitting, as against $180 for an aircraft ticket.

In case of bad weather, the other option for trekkers now is to walk up to Jiri, retracing the footsteps of Edmund Hillary and Tenzing Norgay Sherpa during their historic ascent to the top of the world on May 29, 1953. Jiri to Surkhe, an hour’s walk from Lukla, is a nine-day walk.

It was the Himalayan Trust, the charity Hillary set up, that built the airport in Lukla in 1964.

Dubbed the Highway to Everest, the project started in 2014, but it hit a roadblock after the 2015 earthquakes.

After the 2017 elections that installed local governments under a federal dispensation, Khumbu Pasang Lhamu Rural Municipality took the initiative to take the road project forward.

According to Dip Kumar Basnet, the municipal overseer for the road project, of the 77-km Salleri-Surkhe-Chaurikharka two-lane asphalt road, track opening works of 58 km have been completed so far.

Salleri is the headquarters of Solukhumbu district. The Kathmandu-Khurkot-Ghurmi-Salleri road section is around 270 km.

If things go as planned, people will be able to drive to the Everest region, crossing highlands and in view of panoramic mountain ranges within a day from Kathmandu, according to Basnet.

“If there is no shortage of budget, the project can be completed within one and a half years,” he told the Post. “The black-topping works will also begin soon.”

Chief administrative officer Bhattarai said they would require another around Rs100 million for the remaining track opening works.

Once the road is completed, said Basnet, the region is likely to receive domestic tourists and trekkers in droves, as the road facility will make commodities and travel cheaper.

“The road will bring tens of thousands of people to the Everest region,” said Basnet.

At present, annually over 57,000 foreign trekkers and mountaineers visit the region, and tourism entrepreneurs believe the road access could take that number close to 500,000, including domestic and international tourists.

The numbers, however, could be damaging for the fragile environment of the Khumbu region.

But Bhattarai said they are conscious about the degradation of the Khumbu environment.

“As part of the local government initiative, petrol and diesel vehicles will be allowed only up to Khari Khola,” said Bhattarai.

Khari Khola, at an altitude of 2,140 metres, is two days’ walk before Lukla.

“From there, only electric vehicles will be allowed to Chaurikharka,” he said. “It’s part of the government’s initiative to keep the Everest region emission-free.”